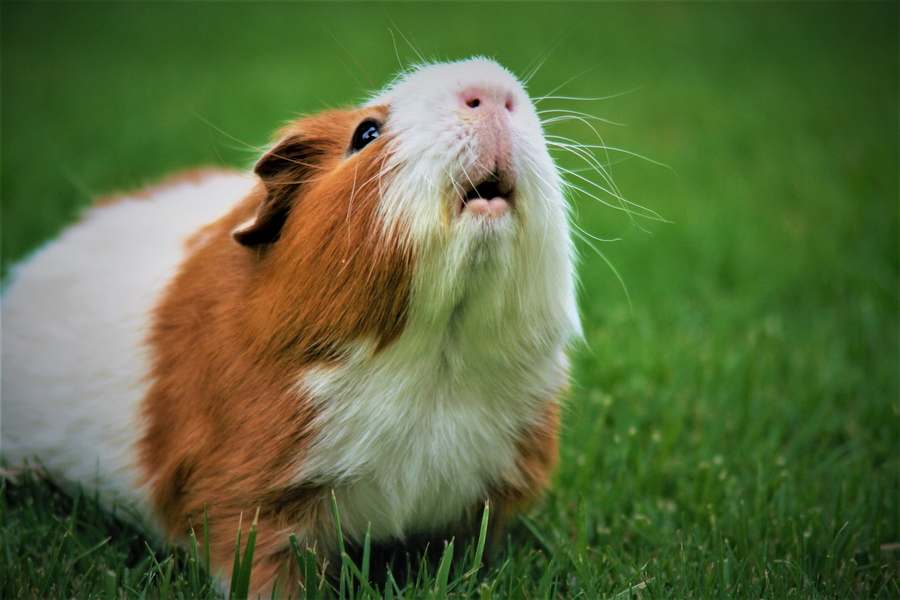 Guinea pigs are truly unique pets to own with big personalities despite their size. They are larger rodents compared to hamsters or gerbils and require a bit more care than people typically think they need.

Regardless, these adorable rodents are full of spunk and can be quite interesting to engage with! Just like any other pet, rodent or not, guinea pigs can experience various health issues.

For the most part, guinea pigs scratch themselves due to they just need to scratch. Or it could be due to irritable skin, in fact, they tend to be a little more sensitive compared to other pets. They are prone to skin issues because their skin is sensitive.

This isn’t to say they aren’t treatable or shouldn’t be kept as pets! They simply need a little more attention to ensure that any issues are caught and addressed.

Most times, guinea pigs won’t show any symptoms of an issue other than not eating, drinking, or relieving themselves. This is the case for any respiratory issues, eye issues, etc just to name a few.

However, other potential problems can showcase symptoms, such as scratching. If you notice your guinea pig keeps scratching, it is important to get it checked out!

Why Do Guinea Pigs Scratch?

Guinea pigs scratch themselves just like any other pet. It could be because they have a simple itch. When they itch themselves, it could be with their mouths to reach onto their sides or to their feet.

They can also itch themselves with their hind legs. Some itching is considered normal. They can get itchy from their hay or just in general like any other creature.

When the itching or scratching becomes a bit more obsessive, that is when a further investigation should take place.

What Does It Mean When Your Guinea Pig Itches?

While itching can occur on a basic level due to a generic itch or hay, there are other possible reasons behind your guinea pig itching. If they are itching themselves constantly, there is usually something else going on.

So if it isn’t a regular itch, what exactly could it be? Below is a list of things that could be wrong with a persistently itching guinea pig.

Common Reasons For A Guinea Pig To Itch

These are the top reasons for a guinea pig to itch. If they do have mites or lice, it is important to take them to the vet immediately.

It could be life-threatening if left untreated as well as extremely uncomfortable for the piggie.

Lice or mites are not typically visible to the make eye. An exotic pet vet will have the means to see these creatures through a special lens.

If it is lice or mites, treatment must be given through topical medications to ensure that it is remedied.

Ringworm is a type of fungal skin infection. It can arise from dirty cage surroundings, so cleaning the cage regularly is necessary.

Typically, the vet will prescribe a treatment for the piggie that could include oral medication or topical treatment that needs to be applied to the guinea pig’s fur and skin.

The treatment can last upwards of 6 weeks, depending on how severe the skin infection might be.

If a guinea pig has dry skin, it can lead to skin fungus if left untreated. Some piggies require a bath with a special shampoo that is used to treat skin issues including dry skin or fungus.

Guinea pigs shouldn’t be bathed much at all unless they become dirty, have longer hair, or in this case, have a health issue.

These special shampoos have moisturizing benefits as well as topical ingredients to help treat any possible fungal issues.

The most common bedding that is used for guinea pigs is paper bedding. It is the safest choice because it is literally just shredded paper that absorbs urine and traps feces.

However, there are other bedding types on the market that can be made of wood chips. These should never be used in a guinea pig cage because not all work is safe for piggies.

This is particularly true for cedar shavings. It can cause itching and a guinea pig could choke on the pieces.

Ideally, guinea pigs should have paper bedding. Many guinea pig owners have found ways to provide bedding for their piggies that are more cost-effective as well.

One of the most cost-effective bedding choices for a guinea pig is fleece bedding. It is super soft, cleaner, and healthier for piggies overall.

The upfront costs can rack up, but these fleece bedding pieces are washable, meaning they can be reused if changed out properly.

Fleece liners have to be treated first before they can be used as bedding.

They have to be washed by themselves in a washer to make the surface “wick” or allow the liquid to pass through.

This is a daunting process but for some guinea pig owners, it is well worth it because the material provides a better environment for their piggies.

Whether the bedding is paper or anti-pill fleece, both are better options compared to wood or cedar bedding.

How Do You Know If Your Guinea Pig Has Mites?

Mites are an issue that arises in guinea pigs. But what exactly are mites? Mites are a form of parasites that attack a guinea pig’s skin under its fur.

The biggest tell-tale sign of mites is constant itching. However, it is important to note that there are two common types of mites that guinea pigs can get.

One is called chirodiscoides caviae and the other mites are referred to as trixacarus caviae.

Chirodiscoides are a mild form of mites that generally do not showcase any symptoms.

However, the trixacarus mites are much more serious and are usually what causes severe itching in a guinea pig.

Mites that cause extreme itching burrow into the skin, making the guinea pig quite uncomfortable. If left untreated, these mites can lead to manage in a guinea pig.

Mange is where the fur starts to shed from the body, leaving behind reddened skin and patchy areas of bald spots. As mange progresses, it becomes more deadly for guinea pigs and they can eventually die.

This is why any consistent itching should be addressed as soon as possible to ensure that any mites are caught early on before it leads to anything drastic.

Mite treatment usually consists of topical medications. Since there aren’t really any specific medications out on the market for guinea pigs, an exotic vet might prescribe medications that can be used on dogs or cats.

The doses for these medications will be greatly reduced to take into consideration the size of a guinea pig.

Some of these medications might be injections, which the vet would administer to address the severity of the mites in the guinea pig.

Mites and lice aren’t exactly the same, however, they do have similar traits. The biggest similarity is that they can survive off the pet on surfaces like bedding or couches.

If you find that your guinea pig has mites, it is important to clean your house as you would with lice by washing anywhere a guinea has been and completely changing out their cage and cleaning their cage.

To clean the cage completely, only use mild dish soap and warm water to wipe down the cage surface. Let it completely dry or towel dry.

How Do You Stop A Guinea Pig From Itching?

It is never a good feeling to see your little rodent friends itching. If you witness them itching, always pay attention to notice how often they are doing it.

If the itching is persistent, always take them to an exotic vet. Regular vets aren’t trained to treat small animals like guinea pigs, rabbits, or gerbils.

They simply require different care from dogs or cats. The vet can assess the situation to see if treatment of some sort is needed.

Itching that isn’t persistent and hasn’t been diagnosed as anything serious by a vet can be avoided. Below are some tips for helping a guinea pig to stop itching!

Tips For Helping A Guinea Pig To Stop Itching

Change The Bedding To Stop Itching

The biggest way to help guinea pigs from itching is to change their bedding. Once again, never use wood or cedar chip bedding.

Only use paper bedding or fleece-treated fleece for bedding options. There are even companies out there that sell anti-bacterial fleece liners that are premade that can be an easy alternative to traditional guinea pig bedding.

Clean The Cage Keeping It Fresh

Cleaning up after a pet is never fun, however, it is always necessary! Depending on the type of bedding that your guinea pig has will determine just how long it will take to clean the cage.

If there is paper bedding, it can easily be collected and put into a trash bag and replaced with new paper bedding.

If there is fleece in the cage, the fleece can be spot cleaned throughout the week for any feces and then completely taken out and washed once a week.

If there are fleece liners that come premade, they can also be spot cleaned throughout the week and taken out and washed, per their directions, once a week.

The cleaning of the cage not only helps with itching but also so that the guinea pigs aren’t surrounded by urine smell all of the time.

Some paper beddings can mask the smell of urine for a short period. Some fleece liners capture urine smells better than others.

If you are using fleece that you have treated yourself, you’ll need puppy potty pads underneath to collect urine. These can easily be thrown out and replaced.

Keep Them Away From Other Guinea Pigs With Mites

Guinea pigs should always be kept in numbers of 2 or more because of how social they are.

They simply thrive in little herds!

However, if you have a guinea pig that has been diagnosed with mites and another one that hasn’t, it might be necessary to keep them separate for a little while until you are sure the mites are gone, as confirmed by an exotic vet.

Itching doesn’t have to be an ailment for a guinea pig at any age! There are plenty of ways to keep itching at bay or treat any issues that might arise and cause itching.

While guinea pigs are more sensitive to things than other pets, these conditions can be treatable!

The most important thing is to remain alert and attentive to your little buddy to watch for any signs of possible mites or other skin conditions.