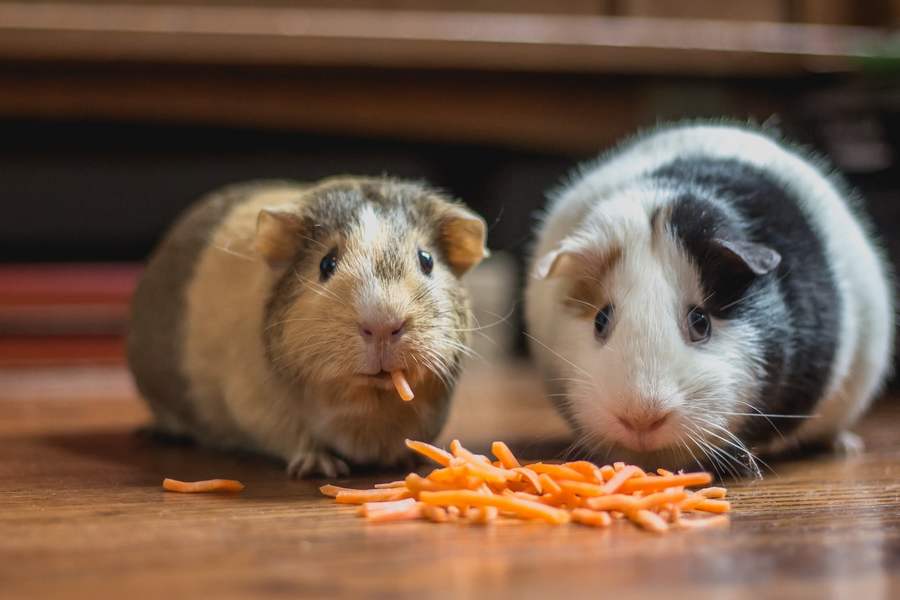 What we feed our pets is always important to us! A huge concern that always comes to a pet owner’s mind is the quality of the food that they are feeding their pets.

Some pet foods have added ingredients that aren’t necessary for an animal’s health. This is particularly true for cat and dog foods, especially when they come from strange countries.

While cats and dogs are typically the victims of pet foods with added ingredients, so are other pets. This can even include pets like guinea pigs.

Guinea pigs are adorable rodent-like creatures that have such big personalities. They aren’t terribly hard to care for but do require more work than most people think.

A huge part of caring for them is ensuring that they have the proper food to eat. Guinea pigs are herbivores so their diets are drastically different from a cat or dog.

Making homemade food for a guinea pig isn’t easy. This is because they only vegetables, hay, and/or pellets, and their food isn’t cooked like other pet food would be. Guinea pigs shouldn’t eat cooked vegetables because it would be too warm for their mouths and the vegetable would lose its crunch.

However, their store-bought foods can have added ingredients as well. A guinea pig’s diet should consist primarily of fresh timothy hay and about 1 cup (or 237ml) of fresh vegetables a day.

Guinea pigs can also eat pellets that are specifically made for guinea pigs. Generally, these pellets will be compressed hay with some added nutrients.

However, these aren’t always suitable for guinea pigs because they are known to overeat them and become a little overweight.

If pellets are to be given to a guinea pig, they should only get around 30 grams (or 1 ounce) of pellets a day.

Considering that they mostly eat hay, veggies, and sometimes pellets, some guinea pig owners might wonder if it is possible to create homemade guinea pig food.

Can I Make My Own Guinea Pig Food?

Many cats and dog owners have ventured into making their pet foods. This is usually done with fresh, simple ingredients.

When making homemade food for a cat or dog, pet owners have a wide variety of options including the use of boiled meats and some vegetables.

It’s a good idea to make your guinea pig homemade food because they need their vegetables to be raw because the texture of the vegetable helps them keep their teeth filed down. Their teeth continually grow and by chewing on hay, raw veggies, and chew toys they are able to keep them filed down.

When making something for a guinea pig to eat, it is important to remember that it will be a different approach than how other homemade pet foods are made.

Instead of making a basic food that is the animal’s primary source of nutrition, making treats for them is a much better option.

Treats are a great way to engage with guinea pigs. Treats also give guinea pigs variety, which they love. It is important to change up their vegetable and treat choices so that they don’t get bored.

How Do You Make Homemade Guinea Pig Treats?

Guinea pigs rely on their owners to help enrich their lives by providing tasty treats, veggies, and hay. In fact, if there is a particular treat or food that a guinea pig really enjoys they will get super excited about getting it! They will often “popcorn“ which is where they jump into the air excitedly!

There are two ways to making homemade guinea pig treats the first is to make baked and cooled off treats to create a crunchy snack. The second way is to make a homemade treat is presented to the guinea pig in a way that they can interact. Both are greats ideas and beneficial to your guinea pig.

The latter of these options usually is made with fresh veggies or hay being put inside of something that they can engage with.

Either option is a great way to add variety and fun to a guinea pig’s diet while giving them something a little less processed! Below is a closer look at both methods!

Guinea pigs shouldn’t eat anything that is overly processed, just other pets. Guinea pigs also shouldn’t have certain foods as it can cause them to bloat or build up calcium in their urine which can be dangerous.

This is why they should only be fed certain things a certain number of times a week to ensure that their diets are well-balanced.

When it comes to baked treats, it is possible to create a baked treat for a guinea pig. The ingredients that go into the treats aren’t that much different from some of the bagged treats that are available from the pet store.

However, the biggest difference is that they aren’t processed the same and the treats from the store can have added calcium or other ingredients.

To Make A Homemade Baked Guinea Pig Treat You Will Need:

These are the basic ingredients for a base to create a baked treat for your guinea pig.

It is important to note that the human baby food should only be a fruit-based one such as apple or pear to add a small amount of sweetness to the treat and act as a binder.

Baby food shouldn’t be an everyday meal for a guinea pig and should only be used to create a baked biscuit for them.

Additionally, rolled oats should also be used in small amounts. Using oat flour is another option to create a dough as well.

To create a base dough, consider using a small amount of oat flour, hay trimmings, or crushed-up pellets and combine them with water or a little bit of baby food.

The ingredients can be adjusted until a dough starts to form. From here, the treats can be rolled out into very small balls or flattened into small discs and baked in a 300-degree oven (150 degrees C) for around 30 minutes or until hardened.

Always let them completely cool down before offering them to your guinea pig.

If you aren’t comfortable using baby food, blending up fresh veggies like cucumbers is a great alternative. You can also grate certain fruits and vegetables like apples and carrots to mix into the dough base before baking.

Either way, this is a great way to create a limited ingredient treat for your guinea pig. Not only will they find them delicious but it can be a bonding moment between you and your piggie as well!

Homemade Treats That A Guinea Pig Can Interact With

Guinea pigs love to play! They are natural explorers who find excitement in new cage environments as well as treats they can interact with.

Homemade treats that they can interact with aren’t necessarily homemade “food”.

Instead, they are homemade toys that incorporate their favorite treats, fruits, or vegetables that encourage them to be active and healthy.

Treats That A Guinea Pig Can Play With:

The boxes or tubes will be the vessels that you use to place the treats inside. Guinea pigs love pulling out hay or treats from various things as it is a way for them to play or engage with what they are doing.

Stuffing hay or leaves of lettuce into a paper towel or toilet paper tube is a great homemade treat for them. The tubes also give them something additional to chew on!

Small cardboard boxes can be a great place to hide treats or veggies and it creates a hiding space for your piggie as well.

Another great idea is to poke small holes in the box or even the tubes and stuff hay or veggies into the holes. This gives your piggie even more to explore!

How Do You Prepare Vegetables For Guinea Pigs?

The biggest part of a guinea pig’s diet should be their hay as it helps their teeth stay ground down.

However, they should also be fed around 1 cup of vegetables a day (or 237ml). The best way to approach this giving your pigs veggies twice a day, splitting up the total amount.

This is helpful because then they get fed morning and night. But how do you prepare vegetables for your guinea pigs? Below are some tips for prepping veggies for piggies!

In general, leafy greens like romaine, red leaf and green leaf lettuce are the best to feed them and should be given to them the most often.

Trying to switch up what veggies you give them is really important to keep them from getting bored. If they get bored, they might not eat.

Below are some of the best, safest foods to feed your piggies!

These are just some of the safest foods to consider feeding your guinea pig. Remember, always switch up what they are eating but make lettuce a primary veggie.

The fruits on this list should only be given to them once or twice a week as they are high in sugar which is not good for their small bodies.

While these foods are safe, what foods aren’t safe for guinea pigs? Below are foods you should NEVER feed your guinea pig.

Foods That Are NOT Safe For Guinea Pigs

It is super quick and easy to do a Google search to see if a food is guinea pig safe. For example, they can eat kale just not all of the time because it can cause calcium build-up.

Cabbage is okay sometimes but not very often because it can cause them to bloat.

Guinea pigs require some unique care but just like any other pet, they can have homemade treats as an addition to their diets!