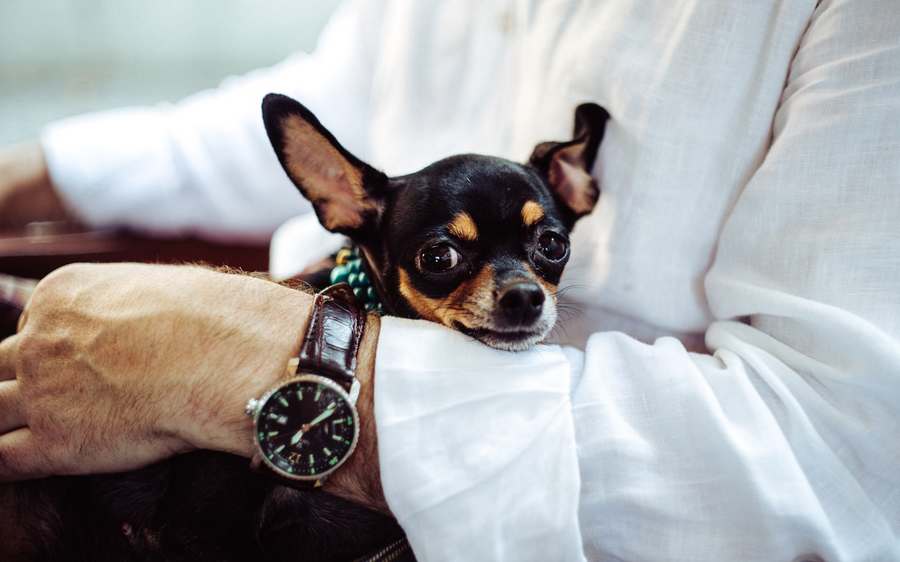 Dogs are a common household pet for a lot of reasons. They are chosen to become apart of someone’s family for comfort and sometimes even protection.

Worldwide, there are over 300 recognised dog breeds. Chihuahuas are one of the most popular dog breeds in the world. These tiny pups are known for their small stances and adorable physical features.

Chihuahuas are mildly smart and can adapt to their surroundings. Just like other dogs, training should occur as early as possible. Although they come in at number 67 on the Stanley Coren’s scale for dogs they still sit up there with other popular breeds.

Even though chihuahuas are one of the most well-known dog breeds in the world, they also have a bad rap in some people’s opinion. They are often thought of as being mean, aggressive, and yappy.

This common misconception often leads people to believe that chihuahuas aren’t very smart and are simply a mean breed. However, this isn’t necessarily true.

All dogs have a certain degree of smartness, with some breeds being considered much smarter than others.

It has been proven that younger pups tend to learn a lot easier than older pups.

Chihuahuas often get their unsavoury reputation because they weren’t trained properly. Additionally, they may not have been properly socialised with other dogs or humans, which can make them a bit uncertain of their world.

If chihuahuas aren’t trained earlier enough or exposed to other dogs, pets, or humans, they can become nervous about their surroundings. This is because they are so tiny and the world around them is quite large from their perspective.

Just because a chihuahua hasn’t been trained or socialised properly doesn’t mean that they are “stupid”.

Some older chihuahuas can still learn to adapt to the world around them if they have a patient and dedicated owner.

It will take a lot longer to get an older chihuahua to be less leery of its surroundings but it isn’t totally impossible.

In short, chihuahuas are smart to a certain extent but aren’t one of the less intelligent breeds either.

Are Chihuahuas Easy To Train?

While it is true that training a puppy earlier, regardless of the breed, is generally an easier process, every dog breed has a distinct type of personality trait.

For chihuahuas, they are known as being strong-minded and stubborn. They like to do their own thing and are considered a harder breed to train.

Once again, this is particularly true for an older chihuahua but can apply to younger ones as well.

Training a chihuahua takes a lot of patience. New pet owners of a chihuahua might find it difficult to train their new puppy. However, there are experienced dog trainers that can aid in getting a new chihuahua trained.

Additionally, there are some tips for helping new chihuahua owners through the training stages of their dog’s life. Below are some important tips for training a chihuahua.

Tips For Training A Chihuahua

Start Training Them As Early As 6 Weeks Old

All dogs should be trained as early as possible but for chihuahuas, it really is important because it helps shape them as they grow into an adult dog.

A new chihuahua puppy should start training as early as 6 weeks old. This ensures that its owner will have ample opportunity to work with the dog as it grows.

It provides them more chances to be introduced to new experiences which helps them understand the large world around them.

Ensure Your Chihuahua Is Getting Proper Exercise

Chihuahuas should get around 30 minutes a day of exercise. Exercise keeps them entertained and lets them unwind any pent up energy they might be feeling.

Younger chihuahuas shouldn’t have an issue with doing around 30 minutes a day of exercise, however, as the pup gets older, the 30 minutes can be broken up into 15-minute increments.

Maintaining their exercise schedule as they grow older keeps them on a routine, which chihuahuas generally like.

Their exercise can range from a variety of activities including heading out for walks, playing games around the house, or playing fetch with one of their favourite toys.

Practise Positive Reinforcement With Your Dog

Encouraging good behaviour through positive reinforcement shows a chihuahua on how to appropriately react to new surroundings, people, or animals.

Positive reinforcement generally will take on the form of giving the pup a treat after the desired behaviour is performed. In addition to this, chihuahuas should be pet or given affection after a certain behaviour as well.

In doing this, chihuahuas become used to being handled and approached by humans. This can greatly help a chihuahua be more accepting of other humans.

They can be territorial over an owner that they have become attached to, so having them get used to other people approaching them is critical.

Consistency is essential with most things in life. This is particularly true for chihuahua training. Repetition and consistency are two of the most important factors for successful training.

It provides a chihuahua with a routine that they can effectively learn and remember. Training should be repetitive until the behaviour is a continued action.

Consistency is a great way to help a chihuahua remember the desired behaviour.

While they aren’t stupid, they aren’t the smartest breed of dog. Consistency is key to proper training for this particular breed.

Introduce Them To New Experiences

Proper training and socialisation for a chihuahua includes introducing them to new experiences.

This can range from taking them to a dog park and bringing other family members to the household.

In doing this, chihuahuas become familiar with other surroundings other than their immediate owner’s presence.

This shouldn’t be done in a brash way. While it is important not to beat around the bush about it, exposing them to new experiences one at a time is the best approach.

Ideally, trying a new thing each week is a great way to slowly, yet consistently add something new to their training.

Chihuahuas might be stubborn with their training but they aren’t impossible to work with. The biggest tip of all is to use positive reinforcement.

This truly is the key to keeping them less aggressive and more associative to good behaviour. They can be smart dogs and are able to achieve great things with a patient trainer!

What Is The IQ Of A Chihuahua?

There is a scale of intelligence that is used for gauging the smartness of a dog. Chihuahuas, unfortunately, rank pretty low on this scale.

However, as expressed, they aren’t at the bottom of the intelligence ladder.

His years of study brought forth a book that was published in the mid-1990s called, “Stanley Coren’s The Intelligence of Dogs”.

In this book, he reported his findings of how smart certain breeds of dogs are based on their responsiveness to commands.

Additionally, his studies showed how many times a dog breed needed to have a command repeated to them before they learned it.

This is critical information because it shows how quickly a dog retains information which is considered to gauge their overall smartness.

In his studies, Chihuahua’s ranked 67th on the list of around 80 breeds that were studied. This is a pretty low ranking and showcases that chihuahuas need around 40 to 80 repetitions of command for it to really sink in.

While this is a low score, they are still considered to have fair working intelligence as well as being generally obedient. A lot of this heavily dependent upon how early a chihuahua is trained.

However, according to Coren, it appears that a dog’s sense of smartness could be attributed to 51% of its genes and 49% of outside factors.

This is where a pet owner’s patience must come into play when training a chihuahua.

They aren’t as smart as other dogs and they do require a bit of work to keep that repetition and consistency at a level that will keep them interested.

Coren’s findings revealed that Border collies are one of the smartest breeds of dogs and some of the lowest ranking breeds are basset hounds and bulldogs.

Chihuahuas aren’t quite near the top but they are also not at the bottom!

Are Chihuahuas The Dumbest Dogs?

Even though chihuahuas have a reputation of being a bit sassy and not quite so smart, they aren’t the dumbest dog breed.

As expressed before, all dogs can have a degree of intelligence to them. However, some breeds will be quicker to learn than others.

Going back to Stanley Coren’s studies of a dog’s smartness, the least smart dog breed is considered to be the Afghan Hound.

While Afghan hounds are considered to be an ancient breed, they require a lot of work to follow commands. Coren’s findings suggested that this breed needed 80 to 100 repetitions of a command before it was learned.

Other breeds in the same category include bulldogs, basset hounds, Shih Tzu, just to name a few.

Once again, this isn’t to say that these dog breeds are so stupid that they can’t learn anything. They can be smart dogs with a little bit of extra work in their training.

Chihuahuas might be a little below the above-average scale for intelligence in dogs, however, they are strong-willed, feisty pups with big personalities who love to be adored.

Through proper training and appropriate positive reinforcement, chihuahuas can be a perfect pet for someone!

link to Do Chihuahuas Shed A Lot?

There are so many factors to deciding what type of dog is right for you, and one stumbling block that can be often overlooked is the amount of shedding. Cleaning up dog hair is a pain. It can get...

Continue Reading
link to What Problems Do Chihuahuas Have?

Anyone who has owned a Chihuahua knows that they are a breed all of their own. Although they are the smallest dog breed, they have a huge personality that makes them a fun and entertaining addition...