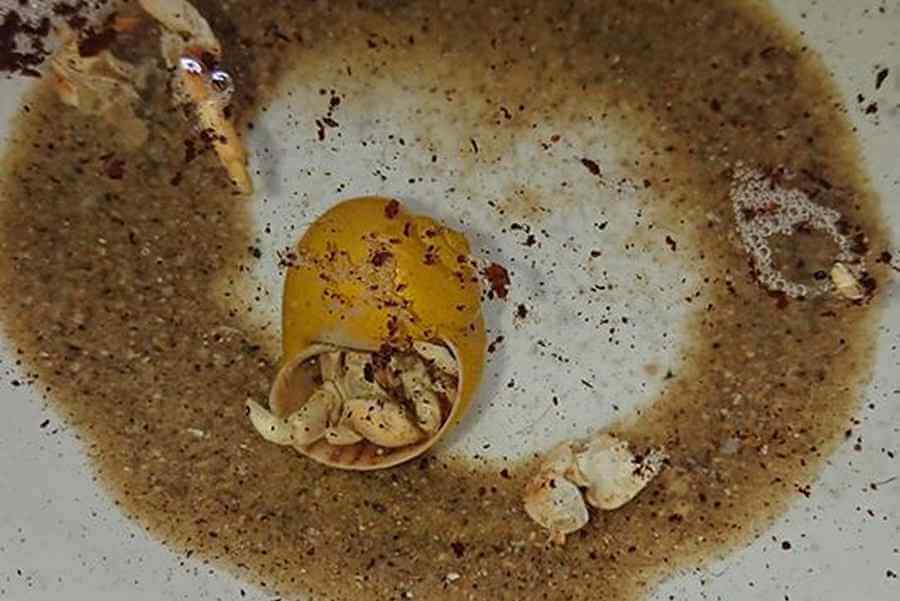 When an animal or creature is laying on its back, it is often thought they are dead. While this is typically true, sometimes it means something a lot less serious.

When it comes to hermit crabs when they lay on their back, this is considered to be one of their molting positions. Hermit crabs grow out of their shell and must go through a shedding process. When they end up on their backs, this does take on the appearance of being dead.

However, close monitoring can determine if it is really dead or alive.

This monitoring can take on two forms. The first one is watching it from within its habitat. If the hermit crab is housed with other hermit crabs, it is absolutely necessary to remove him and place him in isolation to complete his molting process.

This can be done with plastic spoons to scoop it up delicately to be placed in a spacious plastic container. The container should have accessible water and substrate.

A substrate is an essential part of their environment as they burrow. This usually comes in the form of sand or coconut fiber. It is important to put some of this into their isolation container to retain as much of a “natural” as possible.

The lid can have holes punched into it to provide ample air circulation. It can be placed back into the habitat once it has been enclosed.

The other way is to monitor it within its habitat if it’s living alone. Watching for any small movements is key. This is the number one sign that the hermit crab is molting its shell and exoskeleton.

Because hermit crabs on their back can be confused as being dead, it is always safest to assume they may be molting. Molting is a necessary process for hermit crabs and it is something they do as they outgrow their shells.

Their shells protect the softer, more vulnerable parts of their body. As they outgrow their shells, they should be protected to help regrow new shells. A proper substrate should also be provided.

Hermit crabs make for unique pets. They are naturally curious creatures and special care is needed to keep them as pets. They must have access to water and land areas to truly flourish as pets in an aquarium.

When choosing an animal or creature as a pet, knowing some common behaviors of the particular creature is critical. This aids in ensuring the creature is being well taken care of and has everything they absolutely need.

While this is true for any animal, for those a little less common such as hermit crabs, extra care should be taken to know basic facts. There are certain behaviors to assess throughout the lifespan of these creatures.

One of the most common of these is the hermit crab laying on its back.

Why Do Hermit Crabs Lay On Their Side?

This process separates them from the old shell. During molting, they do lay in strange positions and will oftentimes bury in their substrates until the process is complete.

It is important not to bother the hermit crab during the process. They are delicate and disturbance can cause complications or even death.

The exact time frame for molting varies from a hermit crab to hermit crab as it’s based on their size.

The larger the hermit crab the longer the process will take. It is estimated it can take 4 to 8 weeks to complete the entire process.

Hermit crabs laying on their side during the molting process is the most effective way to shed their exoskeleton and shell. It really gives them ample room to move as needed.

When keeping an eye on a hermit crab that may be on its back or laying on its side, something to look for is small jerking movements. This is the legs pulling the body from the old exoskeleton and shell.

If there is absolutely no movement being witnessed, this would be an indication of death over molting.

However, once again, it is important to treat these positions as molting due to the long process of molting and the similarity of appearing dead or molting.

Another huge indicator that the molting process has taken place is seeing the shredded exoskeleton. This will appear to look like a dead crab and a closer look will show that it is a hollow piece within the habitat or isolation tub.

It should never, ever, be removed because the hermit crab needs to consume the exoskeleton. The formation of a new shell on the hermit crab is done through secretions from their bodies that harden into shells.

This is how seashells found on beaches are formed by other marine like creatures. Shells are hardened secretions and get their coloring from whatever the creature’s diet consists of.

The shredded exoskeleton contains minerals from the hermit crab needed to help nourish them and aids in the secretion during another molting process.

Can Hermit Crabs Turn Themselves Over?

Hermit crabs do have strong enough legs to propel themselves up. This includes even from positions due to molting.

Considering they can bury themselves into their substrate areas, they need to be able to dig themselves down under and back up again.

While it is not suggested that hermit crabs be touched during molting, once again if they are housed with other hermit crabs, they should be placed into isolation.

This is to protect them from being bothered by the other crabs. As expressed before, the best way to do this is with two plastic spoons to scoop the crab up into its isolation container.

Being housed with other hermit crabs is the only reason to help the hermit crab flip over, however, it may be tempting to flip them over. As expressed before, this can cause distress to the creature.

The molting process is extensive but also delicate.

The hermit crab on its back or side is the time where they pushing themselves out of the shell. While it may be necessary to isolate them manually due to other tank mates, minimal movement is key.

This minimal movement ensures the crab is not put under too much distress. Moreover, it is important to ensure the hermit crab can safely molt without disturbance.

Other tank mates may eat its exoskeleton that gets shredded and this is what makes it important to move it if it’s with tank mates.

As previously indicated, the exoskeleton is essential to the hermit crabs development in the future.