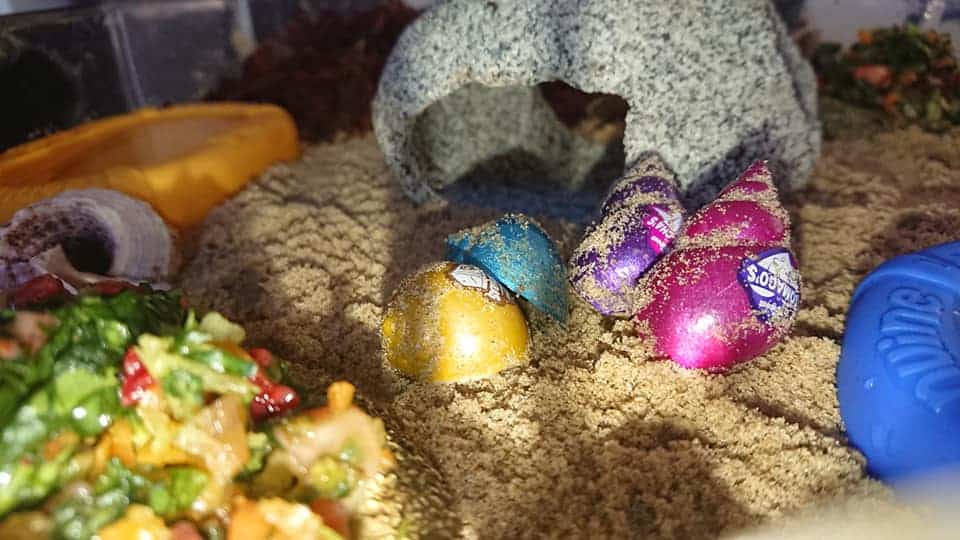 So they have an exoskeleton why do hermit crabs need spare shells?

The addition of a spare shell aids in this as an added protection layer. Hermit crabs are known for “borrowing” empty shells” to use as their house.

Empty shells of various sizes help hermit crabs find a new home to carry around. Throughout the process of molting, aging, hermit crabs can increase in size. This is why having spare shells is important for hermit crabs. They change their shells frequently the shells offer an added protection layer.

It will need to find a suitable size for itself.

Hermit crabs are by far one of the most interesting pets to have! All pets have specific behaviors and needs that help them live the best lives they can.

Owners should take special care to understand these needs before purchasing any creature to keep as a pet. When it comes to hermit crabs, they are super unique.

One of the most common activities for a hermit crab to do is molt. Molting is when a hermit crab sheds its exoskeleton to regrow another one.

This exoskeleton is full of minerals and other substances that are secreted from the creature’s skin.

Can A Hermit Crab Live Without A Shell?

Hermit crabs can live without a shell but ideally, they should have access to a new shell relatively quickly. The shell stores water for the hermit crab as well as protects its sensitive body.

The causes of shell evacuation can include things like stress, poor habitat environment, and shells that are not well-fitting. All of these factors can cause a hermit crab to leave its shell.

If this happens, access to fresh water and food should be kept plentiful. Moreover, the hermit crab should be provided with more shell options to explore.

The hermit crab may stay out of a shell until a suitable one is found. Being shellless is not an ideal condition for hermit crab as it needs its shelter. Once again, their exoskeletons can only do so much.

Why Are Painted Shells Bad For Hermit Crabs?

When it comes to finding shells for hermit crabs, it is important to select proper ones. Painted shells are a danger to hermit crabs and simply not suitable. Due to the foreign paint particles added to the shells exterior.

People have been known to paint their shells to make them more decorative. However, this is not natural and the foreign paint particles can be a stressor to the hermit crab.

Nothing is wrong with natural-looking shells. In fact, the hermit crab rather prefers this option. Shells in themselves are beautiful as no two shells are exactly alike.

This is because the process they are made requires the secretion of minerals and things from the marine animal’s diet into the shell that is hardened.

Hermit crabs need access to the interior of the shell to crawl and burrow into for safety. Because of the perfect size of sea snail shells, these make the best choice for hermit crabs to have access to.

All shells placed in any habitat should be fully rinsed to remove any loose debris. This prep work will ensure the crab will find the shell perfect for their new house.

Painted shells can flake off and cause harm to the hermit crab. A shell should never be painted while a hermit crab is wearing it either.

If they live in a habitat with other hermit crabs, it is common for them to shed their shells and tank mates to take over the abandoned shell. The painted shell will pose a threat to the new occupant.

How Do You Get Hermit Crabs Out Of Their Shells?

Hermit crabs are delicate creatures and should be treated as such. When it comes to getting a hermit crab out of a shell, there is some technique required to get the job done.

One of the main reasons to get a hermit crab out of its shell is because it may be painted which is not safe for a hermit crab. Other reasons can include it may be molting or looks to be stressed out in its current shell.

So how does one remove a hermit crab from its shell? It should be noted that a hermit crab should never, ever, absolutely under any circumstance be pulled out of its shell.

Their tiny bodies cannot endure that kind of stress and they will most likely die.

The removal of a shell has to be the hermit crabs’ choice. It will exit a shell on its own terms, in time. So the best way to accomplish this is to coax the hermit crab out of the shell.

Isolation is the ideal way to get this done. Isolation keeps the hermit crab comfy and accessible to new shells to pick out.

The container for isolation should be roomy enough for the hermit crab to move around. A substrate should also be provided.

A substrate is what is in a hermit crabs natural environment that gives them the opportunity to burrow underground if needed. At least six inches should be provided.

Sand and coconut fibre are the two most common things to use as substrates. It is soft and easy to maintain within their environment.

Having this in their isolation container will help the hermit crab feel comfortable and aids in the process of coaxing them out of a shell.

Food can be provided as well. Hermit crab food consists of vegetation and meaty things like brine shrimp. The more comfortable a hermit crab feels the more likely it is they will come out of its shell.

It is also suggested to mist the container daily so they can still have access to the marine side of their habitat.

Shells play an important part in a hermit crabs lifestyle and overall health. Owners are required to provide ample shell options for their hermit crabs so that the hermit crab always has access to protection.

There are plenty of companies out there that sell packs of seashells for hermit crabs to make new homes out of!

Or simply visit your local beach and find a few small shells for them to move into, please make sure they are empty shells and give them a good clean before your crab moves into them.