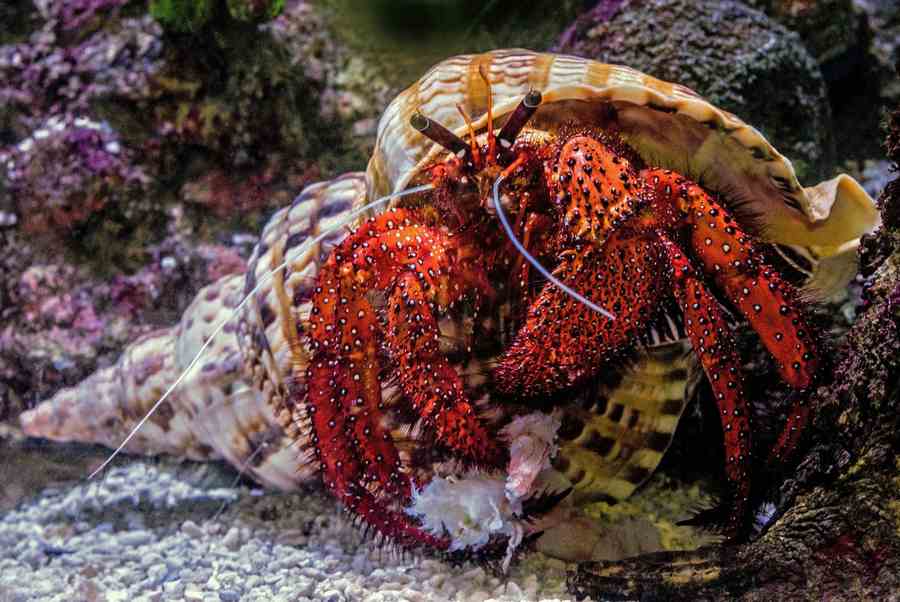 These do live near shorelines, however, they are not like other hermit crabs that can be considered marine hermit crabs. Marine hermit crabs live exclusively under the water and are sometimes kept as pets with reef tanks to help mimic their environment.

Hermit crabs that live in the ocean are often found in large groups because they are social creatures. They are referred to as Marine hermit crabs they prefer underwater living in shallow reefs or along beach shorelines, these ocean dwellers hardly ever leave the ocean to visit the land.

These two specific variations of hermit crab simply do better as a part of a group. It keeps them happy and healthy! While there are hermit crabs in the ocean, they aren’t necessarily the same as other crabs found in the ocean.

Even with around 800 species of hermit crabs roaming the ocean, the variations are truly vast. Hermit crabs are crustaceans, however, they aren’t technically crabs.

Hermit crabs are classified as decapod crustaceans, like other crabs, however, their body structure is what separates them from being a true crabs.

They Look For New Shells In The Ocean

Their shells shouldn’t be confused with other marine life such as sea snails. Snails create their shells from the excretions from their body. Hermit crabs do not produce their own shell, but rather set up home in other sea creatures’ shells.

The way that hermit crabs obtain their shells in the ocean is quite fascinating. Sometimes, they fight other hermit crabs for access to a shell which can result in death.

Fights can occur, but more often than not, they perform what’s called a “vacancy chain“. This process is a result of a hermit crab finding a shell that is entirely too large for its body. The shell has to be well-fitted to properly protect the hermit crab.

The vacancy chain starts with a hermit crab finding a shell that’s too large. They return back to their old shell and stake out the area where they found a larger shell.

The reasoning behind this is to seek out other shells from other marine life that might come along and take residence in the larger shell. Thus, the hermit crab can snatch up one of the left behind shells.

The bottom line is that a hermit crab will do whatever it can to obtain a new shell since it is the primary source of protecting it.

In contrast, land hermit crabs do require water under their shell to keep themselves wet to prevent drying out. This is why hermit crabs need constant supplies of water when kept as pets.

Marine hermit crabs kept as pets need around 37 litres of water (or 10 gallons) since they require breathing underwater. Land hermit crabs on the other hand only need a bowl of fresh water and a bowl of saltwater in their tank to satisfy their need for water.

What Does A Hermit Crab Eat In The Ocean?

Hermit crabs in captivity can eat a variety of things such as vegetables, brine shrimp, etc. They are considered to be omnivores, meaning they eat both plant and animal matter.

Marine hermit crabs in the ocean tend to follow a similar diet. Hermit crabs, in general, aren’t very picky eaters. They’ve been known to eat a variety of things.

However, there are some key things that are a big part of their diet. Below are the foods that marine hermit crabs are known to eat in the ocean!

These foods are found right in the ocean alongside the hermit crabs and make for a delicious meal. They can scavenge these foods quite easily in the water.

Moreover, the fish and plankton they consume are often snatched right up as they float by the hermit crab.

The land hermit crabs that are found along shorelines are known to eat similar things but more often are thought to eat things that wash up along the shorelines. This can include plant life, small marine creatures, etc.

Land hermit crabs in captivity should be fed a variety of foods to keep them interested. They can be known to get bored. This can include marine hermit crabs as well. Variety keeps them happy! Marine hermit crabs have no trouble finding a large selection in the ocean for food.

How Do You Find Hermit Crabs In The Ocean?

Specifically, the aquatic hermit crabs can be found in shallow reefs. They can be seen snorkelling in some parts of the world.

Moreover, it aids in their ability to catch floating food such as fish or small marine life.

When looking for land hermit crabs, they will always be near rocks that are intertidal. This means the rocks are exposed to water washing upon them and often will have algae living on them for the hermit crabs to eat.

It is much easier to locate a land hermit crab because they will always be near a shoreline where they have access to both land and ocean water. Waiting for the low tide gives the best access to seeing these creatures. They are generally under the rocks or on the rocks.