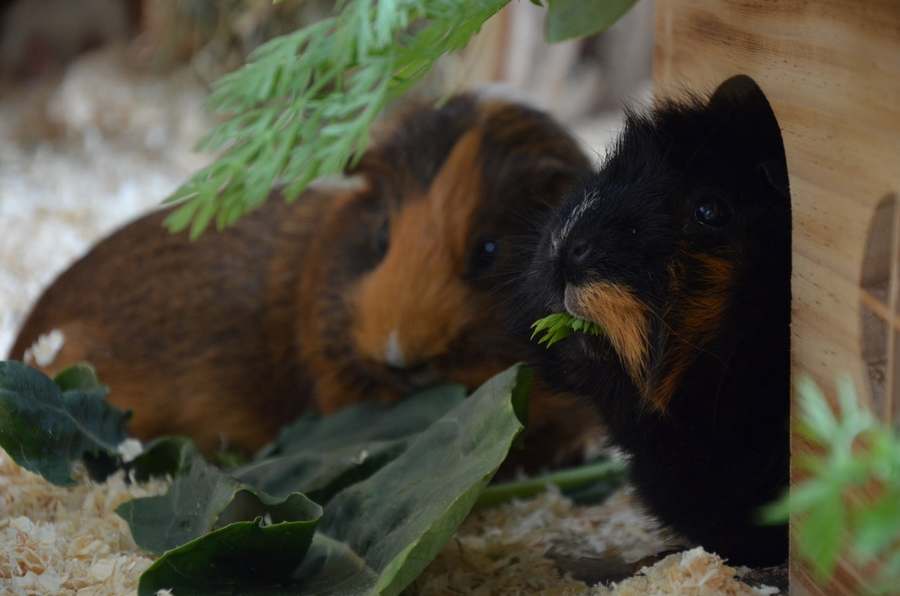 Guinea pigs are a common pet found at most pet stores and even at animal rescue facilities. These adorable creatures are amazing pets to own and care for.

However, they require a bit more care than people think. They rely on humans to bring them veggies twice a day, refill their hay or pellets, and provide them with plenty of toys and space to roam.

People also tend to have a common misconception that guinea pigs aren’t friendly. That couldn’t be further from the truth!

Guinea pigs have tons of personalities and each piggie will be different. Much like other animals, their behaviours are a critical way that they communicate with their owners.

Paying attention to certain actions can help determine exactly what a guinea pig might need.

There are common behaviours associated with guinea pigs, one of them being an issue with them flipping over their food bowl. The cause of this problem may have many factors including issues like their cage is too small, they don’t like the food or they are playing and flip over their food bowl.

Guinea pigs make noises or behave a certain way to showcase how they might be feeling. It is important to observe these actions and make any adjustments as needed to help them out.

One of the biggest behavioral actions of a guinea pig includes them flipping over its food bowl. A guinea pig should always have access to their hay, pellets (if you are providing them), and water.

The pellets are generally kept in some form of the bowl so that they are in their cage with them.

It is common for a guinea pig to use its front paws to knock over their pellet bowls. Moreover, sometimes fresh veggies are put in bowls as well and they can flip these over as well.

When this happens, the cage tends to get dirty quicker. Dirty cages aren’t good for a guinea pig’s health because they have a fragile respiratory system.

While this is a common problem, there are some reasons behind it that can be addressed to fix the issue!

Why Does My Guinea Pig Flip Over His Food Bowl?

It can be frustrating when a guinea pig flips his food bowl over. Especially if you have just filled it up!

It creates a mess that needs to be cleaned up and the food can go to waste if the piggie decides not to eat it.

But why do they do this? Below are the most common reasons why a guinea pig is flipping over his food bowl!

Common Reasons Why A Guinea Pig Flips Over His Food Bowl

The Guinea Pig Cage Is Too Small

Small cages are the biggest reason why a guinea pig will flip over his food bowl. This is because the guinea pig simply doesn’t have enough space to move around his cage resulting in his food bowl being knocked over.

When there is more than one piggie, the cage should be even larger than this to ensure everyone has enough space.

Having a bigger cage is not only helpful for keeping the food bowl upright but it also gives guinea pigs plenty of space to run around.

This gives them ample exercise and helps keep them as healthy as possible! Everyone’s house is obviously different and not everyone is going to have a large amount of space to dedicate to a guinea pig.

However, it is important to attempt to give them as much space as possible to aid in keeping them healthy and happy.

If the food bowl contains a veggie they don’t like or pellets they aren’t used to, they might flip over their bowl. This is a signal to try giving them something else.

Their diets should always consist of fresh chopped veggies and timothy hay. They love having variety in their veggies or fruits.

Attempt to give your piggie different lettuces (although stay away from iceberg lettuce as it has no real nutritional value and can mess with their digestive systems), carrots, cucumbers, zucchini, bell peppers etc.

Fruits should only be given a couple of times a week as they are high in sugar.

Providing a guinea pig with a variety of veggies not only keeps them happy but also entertained. It is exciting for them to try new veggies or have different veggies on different days of the week.

This is similar to how humans wouldn’t care to eat the same food every single day. Eventually, we would get bored.

Playing Around And Bowl Gets Knocked Over

They could also be playing with their cage mates. When they are running around like this it is possible to knock over a pellet or food bowl. It is important to never discipline a guinea pig.

They are prey animals and while they are smart, they are small and loud noises affect their hearing. It is much easier to just clean up the mess and move on!

To avoid having a food bowl knocked over during playtime, try setting a routine for when your guinea pig is fed. In fact, guinea pigs enjoy having a routine as they know when to expect their daily feeding.

While some guinea pig parents give their piggies pellets every day, they aren’t necessary. Some guinea pigs will overeat these pellets and become overweight.

As long as they have fresh veggies and hay, they are happy. If you aren’t giving them pellets, this makes controlling the food bowl even easier because you will only be using it to distribute veggies.

You would be controlling when the bowl is in the cage and for how long!

These are the three top reasons that a guinea pig will knock over its food bowl. There are ways to prevent a food bowl from being tipped over.

If the cage is too small, try making it bigger. Try only feeding them what they like and need (while still giving some variety) and attempt to set a schedule so that you can remove the bowl when it isn’t needed.

Additionally, think about the type of bowl that you are using. Light-weight bowls like stainless-steel ones meant for cats can be easy for them to tip over. Plastic bowls are also too light.

A good rule of thumb is to use a heavier bowl, usually ceramic, to help with bowel tipping. However, some piggies can even tip these over.

Some pet companies have designed specific bowls for guinea pigs that are supposed to be “tip-resistant”. Some of these brands do have a good product as the bowl features a base that extends out from the bottom of the bowl.

So there are certainly options to consider!

There is also the option to not use a bowl at all. If you aren’t giving them pellets and are just giving them vegetables, consider using a small plate or simply placing the veggies directly in their cage.

Just be sure to pick up any scraps so that there isn’t old food lying around the cage.

It is possible for two guinea pigs to share a food bowl but it usually won’t happen.

This is all dependant upon the guinea pigs and their attitudes towards each other. Male guinea pigs generally aren’t housed together as they can express dominance which can be stressful on the piggies.

Herds of piggies generally include a mixture of females and males (usually neutered) and these herds generally don’t show dominance as they aren’t a threat to each other.

Guinea pigs are docile pets, however, they can be protective of their things, and even in herds they may nip or get feisty with each other.

This is a common behavior among cagemates but this behavior should always be monitored to ensure it doesn’t get too aggressive.

Generally, it won’t but it is best to be watchful. In order to help curb any bickering, there should be more than one food bowl.

They may share bowls but more than likely they are going to enjoy having multiple locations to access their food.

They should also have more than one water bottle. Having two water bottles in the cage is the best option as they won’t have an issue sharing the two bottles.

Never put a water dish in the cage as guinea pigs aren’t meant to drink water like this. Additionally, this could also be tipped over and get their cage, feet, and bodies wet.

While guinea pigs might tip over their food bowls, there are easy solutions to ensure that this behavior is controlled as much as possible!

From creating a feeding routine to changing the bowl type, there are plenty of options out there!